Emotional Bullying is by far the most complicated form of bullying to understand and is impossible to cover in one article. Our intent is to provide an overview for parents and provide some excellent resources for further knowledge on the topic.


Here are some of the particulars that are covered

The definition of emotional bullying

The origin of this type of bullying

Some of its common characteristics

What the statistics tell us about this form of bullying

The anatomy of an emotional bully and what motivates them

The negative effects of emotional bullying

The Definition of Emotional Bullying

Debra J. Pepler research professor at York University defines it as a relationship problem in which an individual uses power and aggression to control and distress another. 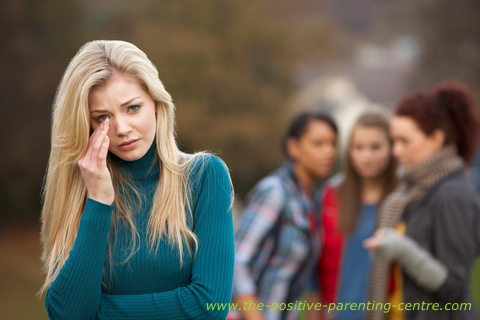 It is considered the most common form of bullying and naturally derives its name from the root word "emotion" as it targets the positive emotions of its victims such as trust, pride, happiness, hopefulness, contentment, confidence and worthiness.

It triggers the negative aspect of ones emotions such as hate, anger, fear, panic, shame, anxiety, insecurity, frustration, inadequacy, and worthlessness to name a few.

Statistically, it is considered the most damaging form of bullying as it is the hardest to detect and eradicate, and the repetition of abuse can lead to the most devastating consequences of mental disorders and suicide attempts.

The Origin of Emotional Bullying

The type of negative behaviour can vary from minor acts of rolling one's eyes, smirking, giving silent treatment to more serious acts of exclusion, betrayal and cruel verbal abuse. (More on this below.)

Social scientists have labelled such negative and cruel behaviour as "Relational Aggression."

It's important to realize that most children experience some form of relational aggression, either on the receiving end or employing its strategy. All children handle it differently. Some easily dismiss or ignore it, some retaliate in different ways, while others take it very personal and develop significant negative repercussions.

Where do they learn this behaviour from?

Close observation of adults in their lives, parents, older siblings, friends, and of course television.  One or more forms of relational aggression can be witnessed almost anywhere in their lives.

Some parents themselves without even realizing it model mild forms of relational aggression with a spouse, other adults or family members in their lives.  Children are quick to detect an adult's attempt at manipulating others, including themselves.

Different Parenting styles in which parents exercise a rigid "authoritarian parenting style" or even a more hands off style of "permissive parenting," can contribute to relational aggressive behaviour.

That is why it is so important to model a "positive parenting" strategy when raising children.  Children model what they see, particularly if it works to their advantage.

Young children as early as pre-kindergarten experiment in the exertion of minor forms of aggressive behaviour.  They want to be in control, as they perceive their parents and other adults to be.

In their book "Little Girls Can Be Mean" (Michelle Anthony, M.A,Ph.d and Reyna Lindert, Ph.d) point out that children from kindergarten to grade two generally do not have an intent to harm.  Their acts usually fall on the "unintentionally mean" end of the bullying continuum.  In most cases they are just trying to "be somebody" in the social scene.

From grades three and up they are more socially sophisticated and true cliques begin to form. This is generally the time you see deliberate actions with an intent to harm. This is their inaugural attempt at establishing personal power and control of their own social life as they begin to realize how their choices influence others.

Young children try many strategies until they discover what works specifically for them.  In any pre-school to primary grades you will typically hear common statements like;

With different personalities and sensitivities in children, statements of this nature can be distressingly painful to one child, yet easily dismissed by another.

It is of utmost importance for children to feel socially accepted. The act of being de-friended or excluded from the social scene has a powerful impact that can significantly affect a child socially, emotionally, and academically.

It is extremely important for adults in a child's life to have a watchful eye and intervene at the onset of such behaviour, with redirection, encouragement of positive communication, support for the victim, and guidance in the appropriate social interaction.

When relational aggressive behaviour is not appropriately addressed and the perpetrator discovers an advantage through repetition, "emotional bullying" soon rears its ugly head.

Based on the law of attraction the longer the perceived benefit of this behaviour is validated in the mind of the perpetrator, the greater the likelihood of it escalating to more extreme forms of bullying.

Following are some typical and most common strategies used in emotional bullying tactics (otherwise known as relational bullying).

What The Statistics Tell Us
About Emotional Bullying

Here are some results extracted from an American study of the 2012-2013 school year performed by the Olweus Bullying Prevention Program and published by "The Hazelden Foundation."  The study represents grades 3 to 12 where more than 200,000 students were surveyed representing 785 schools.

As the charts below reflect, generally, verbal bullying is predominant throughout the school years, followed by the spreading of false rumours, with social exclusion following close behind.

For boys physical bullying remains fairly consistent throughout the school years with a constant increase of relational bullying behaviour.

Whereas with girls, physical bullying drops considerably with a much higher increase in relational bullying behaviour throughout the school years. 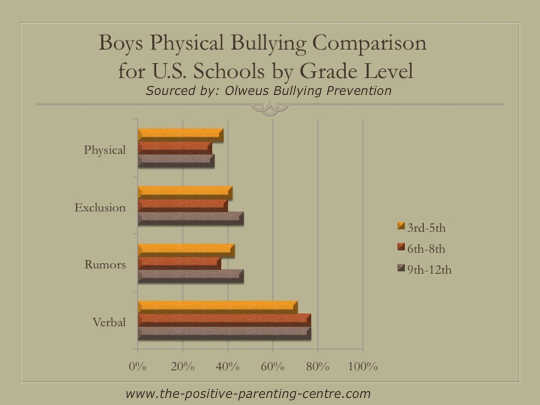 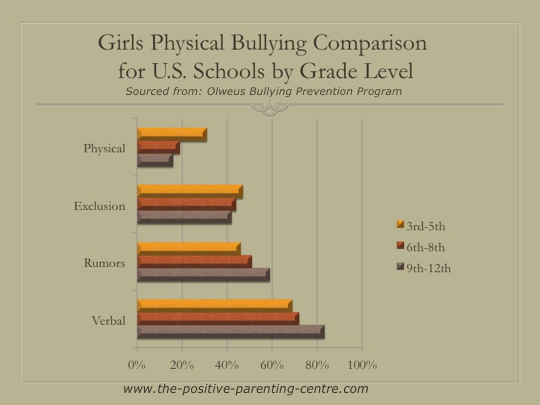 The pie chart below reflects the Canadian relational bullying statistics averaged throughout the years among boys & girls. 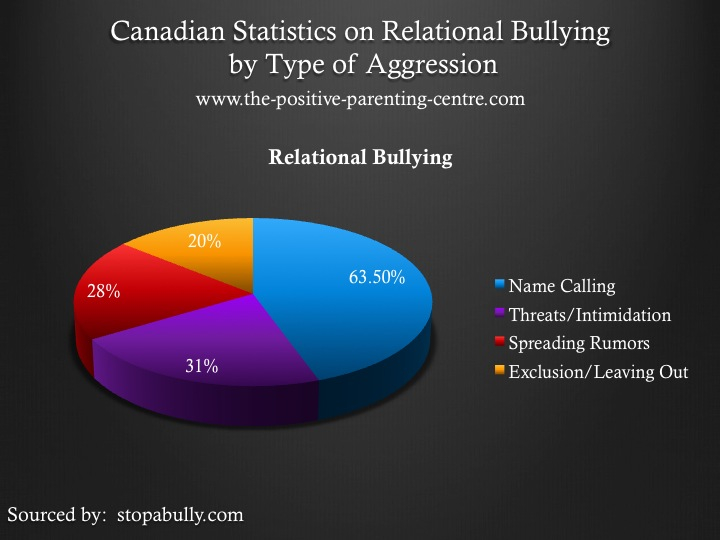 The Anatomy of an Emotional Bully
and What Motivates Them

I refer here to the bullying by its full definition as described in our (bullying definition article, "as repetitive, an imbalance of power, with an intent to harm), not in the occasional misguided negative behaviour of young primary grade children attempting to secure friendship and develop their social standing.

(Although if not guided by appropriate positive social interaction, they too are susceptible to becoming a full fledged emotional bully.)

Your typical emotional bullies are master manipulators controlling their target by disempowering them through fear, shame, guilt and embarrassment.

They often deceive their victims into believing they are friends, when their relationship is really just a means to an end. They are often referred to as  frenemies, relying on smooth talk and lies. They typically attempt to isolate and dehumanize their target by building alliances and excluding their victim.

Who are these bullies?… What do they look like?

They are extremely difficult to identify, they look just like any other child. Some may have a rough edge to them with not many friends, while others are quite popular and socially adept.  Fortunately, by being attentive with close visual observation accompanied by keen listening skills their behaviour is easy enough to detect.

Of course the devious ones are more cleaver while their behaviour is more subtle as they are fully aware of the consequences of being exposed.

What is their Motivation?...

In a nutshell… Power and control. Their triggers can be anything from envy, jealousy, resentment, prejudice and intolerance for any reason, race, religion or sexual orientation.  Unfortunately the most rapid growth in popularity seems to be motivated by status competition. (discussed further below)

The analytical complexity in defining the underlying cause of their behaviour lends itself to multiple analogies.

Some are considered to be weak, dysfunctional, and emotionally immature with low self-esteem, compensating for their own weakness through aggression.  They often come from homes where aggression and violence and disregard for the rights of others are the norm.

A recent study by the American Sociological Association concludes that many aggressors posses strong social skills, and are much more sophisticated and calculated. They harass and manipulate their peers, not to reenact their own troubled home lives, but to gain status by climbing the rung on the social ladder.

Consequently, the study points out to the extent that aggression is instrumental for social climbing, increases in status also increase the risk of victimization—at least until the pinnacle of the hierarchy is reached.  The top 5% sit just above the fray, unlikely to fall victim to their peers.

Hence, their targets are not necessarily weaker or less social, on the contrary, they are often high achieving students involved in sports, clubs, volunteer organizations, and after school community activities and projects.

The bully is threatened by their confidence, integrity, popularity and success and feel steps must be taken to destroy their credibility and reputation among their peers.

On A Personal Note

One of my own daughters fell victim to emotional bullying and the stress on her and our entire family was extremely challenging to say the least.

Fortunately my daughter is, and was at the time, an extraordinarily positive person, with exceptional character traits.  Combined with our love of family, positive communication, and strong support system it provided the glue that held things together throughout this emotional and trying time for my daughter.

As a result of this unfortunate experience in my daughter's life, she has resiliently emerged an even stronger more empathetic person. We are extremely proud of her display of courage, self-discipline and perseverance during such an adverse time in her young life.

Unfortunately not all children respond as my daughter did, and of course the circumstances and extent of the torment can vary substantially.

It is no secret that not all victims of bullying survive such torment. As mentioned in our article "Understanding Types of Bullying," according to The Center of Disease Control, there are 4,400 suicide deaths of American teens and younger children annually due to bullying. With 100 attempts for every successful suicide, this represents 440,000 actual attempts at suicide annually.

The Negative Effects of Bullying
(This Link is not Live Yet)

Different Types of Bullying and Teasing vs. Taunting

Learn more about the types of bullying, and why it's important for parents to understand the difference between teasing and taunting.
Continue reading....

Learn more about these physical bullies, why they behave as they do, who is susceptible to their wrath, and what are some of the ramifications for the victims.
Read about it here...

Go to our Home Page 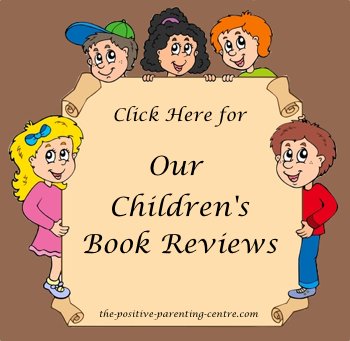 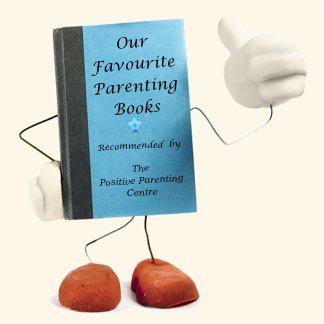